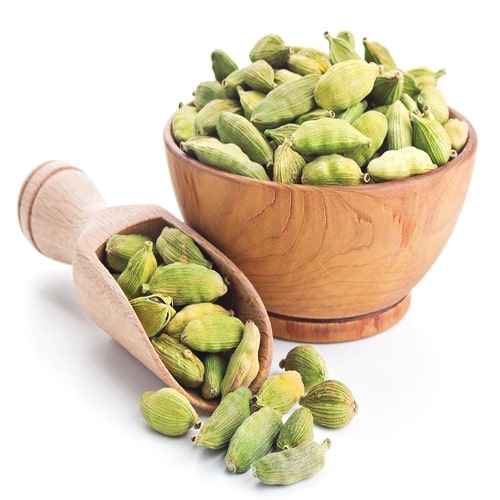 Description :
Cardamom is widely known as the ‘queen of spices’ & has major health benefits. It’s aroma has an undeniably soothing effect. Cardamom helps ease the indigestion and maintains an optimal gastrointestinal balance. It promotes clear breathing and better respiratory health, it ultimately eases the symptoms of asthma and also consists of anti depressant qualities.

Not to forget about the delicious ‘cardamom tea’ which most Indians can not go by a day without having.

Damping off or clump rot or rhizome rot
Drench nursery with 1 lit of Formaldehyde in 50 lit water for 3 sq.m. before sowing. Prophylactic drench with 0.25% Mancozeb or 1% Bordeaux mixture immediately after germination to control Pythium and 0.05% Carbendazim after 15 days to control Rhizoctonia.

Harvest
Harvesting commences from the third year onwards. But good yields are expected from 5th year. Harvesting is generally done once in a month. Pick only those fruits which are just ripe but not fully ripe. Fully ripe fruits tend to split on drying and do not develop the desirable dark green colour.

Irrigation/Cultivation
Irrigation
Generally Cardamom is grown as a rainfed crop, but provide sprinkler irrigation during summer for increased yields.

It is cultivated in Kerala, Karnataka and Tamil Nadu. India is the second largest producer of small cardamom.In organic cultivation of cardamom, the methods to be followed should conform to the standards laid down for the purpose. An isolation belt of at least 25 m wide is to be left from all around the conventional plantation. The produce from this area shall not be treated as organic. A conversion period of three years is required for an existing plantation for organic cultivation.