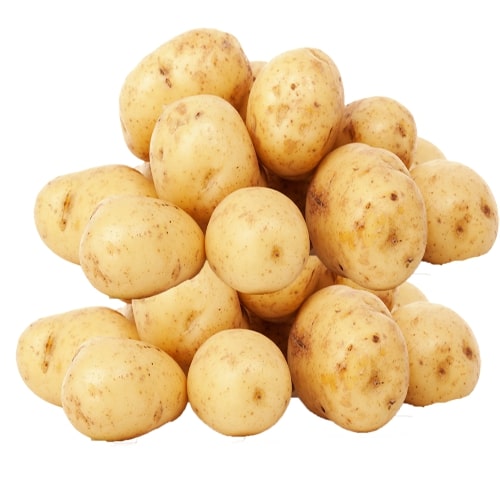 Description :
The potato is a root vegetable native to the Americas, a starchy tuber of the plant Solanum tuberosum, and the plant itself, a perennial in the family Solanaceae.

Wild potato species, originating in modern-day Peru, can be found throughout the Americas, from the United States to southern Chile.The potato was originally believed to have been domesticated by indigenous peoples of the Americas independently in multiple locations,but later genetic testing of the wide variety of cultivars and wild species traced a single origin for potatoes. In the area of present-day southern Peru and extreme northwestern Bolivia, from a species in the Solanum brevicaule complex, potatoes were domesticated approximately 7,000–10,000 years ago. In the Andes region of South America, where the species is indigenous, some close relatives of the potato are cultivated.

Potatoes were introduced to Europe from the Americas in the second half of the 16th century by the Spanish. Today they are a staple food in many parts of the world and an integral part of much of the world's food supply. As of 2014, potatoes were the world's fourth-largest food crop after maize (corn), wheat, and rice.

Soil
The soil should be friable, porous and well drained. The optimum soil pH range is 4.8 to 5.4. It prefers a cool weather. Potato is mostly grown as a rainfed crop in regions receiving a rainfall of 1200 – 2000 mm per annum.

Seed treatment
Use Carbon disulphide 30 g/100 kg of seeds for breaking the dormancy and inducing sprouting of tubers.

True potato seed
The cost of seed tubers and spread of virus disease can be greatly minimized by using ‘true potato seeds’. The hybrids developed by Central Potato Research Institute viz., HPS 1/13, HPS 11/13 and HPS 24/111 are suitable for true potato seed production. The seeds are raised in nursery beds like other vegetables and seedlings are transplanted 30 days after sowing. For raising one hectare of crop, a quantity of 100 g seed is required.

Preparation of field
Prepare the land to fine tilth.  In hills provide an inward slope in the terraces. Provide drainage channel along the inner edge of the terrace. Form ridges and furrows with a spacing of 45 cm between ridges either by hand hoe or ridger.

Application of fertilizers
Apply 15 t/ha of FYM and 2 kg each of Azospirillum and Phosphobacterium as basal and 120 kg N, 240 kg P and 120 kg K/ha in two splits; half as basal and the balance for top dressing on 30 days after sowing.  Apply Magnesium sulphate at 60 kg/ha as basal dose.

Season
Plains
Planting is done during October – November in plains.


Plains
Planting can be done during August.

Irrigation
Irrigate the crop 10 days after planting. Subsequent irrigation should be given once in a week.

After cultivation
Weed control
The critical period of weed-competition is upto 60 days and it is essential to keep the field weed-free during that period. Take up the first hoeing on 45th day without disturbing stolons. Second hoeing and earthing can be taken up at 60th day.