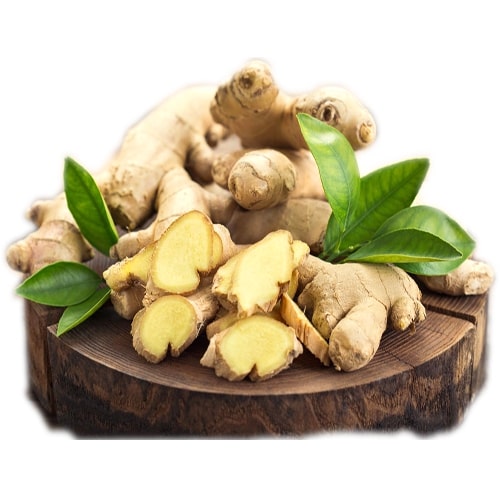 Description :
Ginger (Zingiber officinale) is a flowering plant, ginger root or ginger, is widely used as a spice and a folk medicine. It is a herbaceous perennial which grows annual pseudostems (false stems made of the rolled bases of leaves) about one meter tall bearing narrow leaf blades. The inflorescences bear flowers having pale yellow petals with purple edges, and arise directly from the rhizome on separate shoots.

Ginger is in the family Zingiberaceae, which also includes turmeric (Curcuma longa), cardamom (Elettaria cardamomum), and galangal. Ginger originated in Island Southeast Asia and was likely domesticated first by the Austronesian peoples. It was transported with them throughout the Indo-Pacific during the Austronesian expansion (c. 5,000 BP), reaching as far as Hawaii. Ginger is one of the first spices to have been exported from Asia, arriving in Europe with the spice trade, and was used by ancient Greeks and Romans. The distantly related dicots in the genus Asarum are commonly called wild ginger because of their similar taste. In 2018, world production of ginger was 2.8 million tonnes, led by India with 32% of the world total.

Ginger Production Technology :
Vintage people of India 'makaolacata" articulated by the world's leading medical substances Ginger is used in Chinese and Japanese people for a long history of medical substances containing aromatic substance. To this day, the traditional medical systems in the world occur during pregnancy, vomiting, dizziness and cold is used as the primary clinical. Medicinal ginger rich, the people of India, China and Japan in the cooking methods ginger is essential. Thus, all hot and temperate regions of the world in medical popular ginger have been widely cultivated. South East Asian Countries are the origin of Ginger. From India and China, the crop spread to other countries. Currently, Ginger cultivated in countries like India, China, Jamaica, Taiwan, Fiji, Mauritius, Brazil, Indonesia, Japan, Malaysia, Philippines, Thailand and Bangladesh. It is in the Gingiferae plant family and 'Gingifer officinali is the botanical name. The Latin name of the genus cinjiper was derived from the Tamil word injiver. The name Ginger spread by Arab traders to the Greek and Roman developed countries.

Mulching is done at the time of planting with green leaves. After each top dressing, earth up the plants.