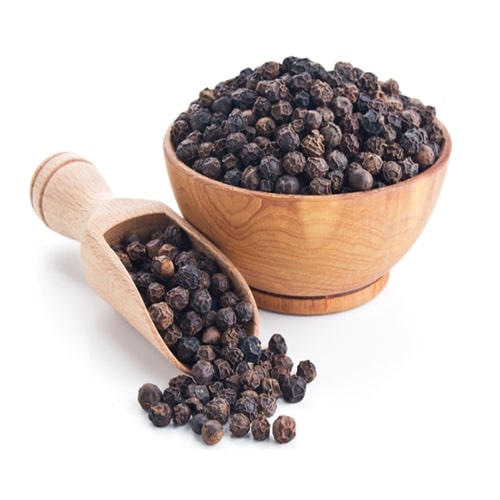 Production of rooted cuttings
Traditional method
Runner shoots from high yielding and healthy vines are kept coiled on wooden pegs fixed at the base of the vine to prevent the shoots from coming in contact with soil and striking roots. The runner shoots are separated from the vine during February-March and after trimming the leaves, cuttings of 2-3 nodes each are planted either in nursery beds or in polythene bags filled with fertile soil. Adequate shade has to be provided and the polythene bags are to be irrigated frequently. The cuttings become ready for planting during May - June.

Serpentine method
Cheaper propagation technique for production of rooted cuttings of black pepper is serpentine layering. In a nursery shed with roofing sheet or shade net, rooted black pepper cuttings are planted in polythene bags holding about 500 g potting mixture, which will serve as mother plants. As the plant grows and produces few nodes small polythene bags (20 x 10 cm) filled with potting mixture may be kept under each node. The node may be kept gently pressed in to the mixture assuring contact with the potting mixture with the help of a flexible twig such as mid rib of a coconut leaflet to enable rooting at that junction. Roots start growing from the nodes and the cuttings keep on growing further. The process of keeping potting mixture filled polythene bags at every node to induce rooting at each node is repeated. In three months the first 10 to 12 nodes (from the mother plants) would have rooted profusely and will be ready for harvest. Each node with the polythene bag is cut just below the rooted node and the cut end is also buried into the mixture to induce more roots. Polythene bags filled with solarized potting mixture or soil, granite powder and farmyard manure in 2:1:1 proportion is recommended for producing disease free rooted cuttings. The rooted nodes will produce new sprouts in a week time and will be ready for field planting in two-three months time. Daily irrigation can be given with a rose can. On an average, 60 cuttings can be harvested per mother plant in a year by this method.

Management
Planting
Slopes facing West and South should be avoided.  Pits of 50 cm x 50 cm x 50 cm size are dug at a spacing of 2 to 3 m in either direction (Panniyur 1 - 3 x 3 m).  5 to 10 kg of FYM/Compost is mixed with top soil and the pits are filled.  Rooted cuttings are planted in June - July @ two per standard like Silver oak, Dadap and Jack.  In multitier cropping system, standards should be planted at a spacing of 7 – 8 m.