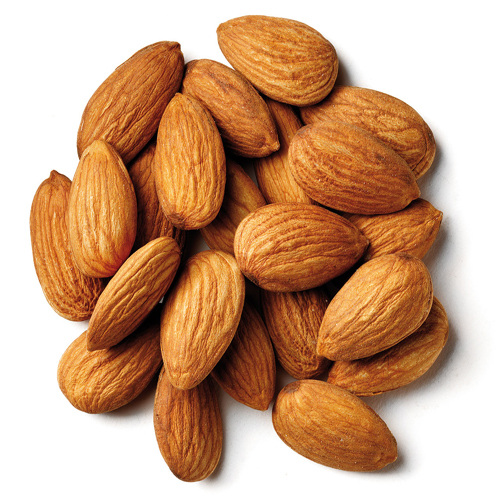 Description :
The almond  is a species of tree native to Iran and surrounding countries but widely cultivated elsewhere. The almond is also the name of the edible and widely cultivated seed of this tree. Within the genus Prunus, it is classified with the peach in the subgenus Amygdalus, distinguished from the other subgenera by corrugations on the shell surrounding the seed.

The fruit of the almond is a drupe, consisting of an outer hull and a hard shell with the seed, which is not a true nut, inside. Shelling almonds refers to removing the shell to reveal the seed. Almonds are sold shelled or unshelled. Blanched almonds are shelled almonds that have been treated with hot water to soften the seedcoat, which is then removed to reveal the white embryo.

Sustainability:
Almond production in California is concentrated mainly in the Central Valley, where the mild climate, rich soil, abundant sunshine and water supply make for ideal growing conditions. Due to the persistent droughts in California in the early 21st century, it became more difficult to raise almonds in a sustainable manner. The issue is complex because of the high amount of water needed to produce almonds: a single almond requires roughly 1.1 US gallons (0.92 imperial gallons; 4.2 litres) of water to grow properly. However, cow's milk requires more water to produce than almond milk, and in 2014, California produced 42.3 billion pounds of cow's milk, while in the same year California produced only 2.14 billion pounds of almonds

Health:
Almonds are included as a good source of protein among recommended healthy foods by the US Department of Agriculture. A 2016 review of clinical research indicated that regular consumption of almonds may reduce the risk of heart disease by lowering blood levels of LDL cholesterol.

Similarly, Christian symbolism often uses almond branches as a symbol of the Virgin Birth of Jesus; paintings and icons often include almond-shaped haloes encircling the Christ Child and as a symbol of Mary. The word "Luz", which appears in Genesis 30:37, sometimes translated as "hazel", may actually be derived from the Aramaic name for almond (Luz), and is translated as such in some Bible versions such as the NIV. The Arabic name for almond is ??? "lauz" or "l?z". In some parts of the Levant and North Africa it is pronounced "loz", which is very close to its Aramaic origin.

Season
lmond requires climate having slightly hot summer temperature ranging from 30C to 35C and cool winters for plant growth and kernel filling. Unopened blossoms shall withstand cold up to – 2.2C, but blossoms at petal fall stage are damaged at 0.50 C to – 1.1 C. The blossoms can withstand temperature from -2.2 C to -3.3 C for a short time but if low temperature continuous for long hours they get damaged easily.

Therefore, pruning should be done in such a manner that 1-5 of the fruiting wood is replaced every year. Prune in such a way that new wood with new spur growth is constantly replacing spur that are no longer fruitful or useful. To meet or achieve this, only prune or remove older tree branches that is 1.2 cm to 3.7 cm in diameter. Thin out very little of the smaller wood, except to remove unwanted suckers or water sprouts. The success of pruning in almond plantation can be judged in part by the length of new shoots over the entire tree every year, if other factors are not impacting growth.

Inter cropping in almond farming: – During the almond orchard pre-bearing stage, inter cultivation with several suitable crops are recommended for some extra income through sustainable utilization of inter spaces. The best inter crops in almond farming are like saffron, pea, pulses, carrot, seed production of turnip, knoll khol, mustard and bulb production of onion and garlic, and aromatic plants and medicinal plants like lave dine, lavender. Besides getting some extra income, the growing of legumes like pulses and pea will increase the soil fertility, turnips seed production and mustard augmenting to pollination by attracting bees, and growing some medicinal and aromatic trees like garlic, lavender, lave dine etc are acting as repellent to ant pests, insects and diseases.

Irrigation/Cultivation
The critical stages of almond plantation which are most sensitive to water shortages are flowering (Feb to March) and fruit development (April-May-June).Therefore, watering must be provided during these stages for getting higher yield of quality almond nuts. The drip irrigation watering method found very efficient in almond farming, try to adopt drip irrigation for better water management.